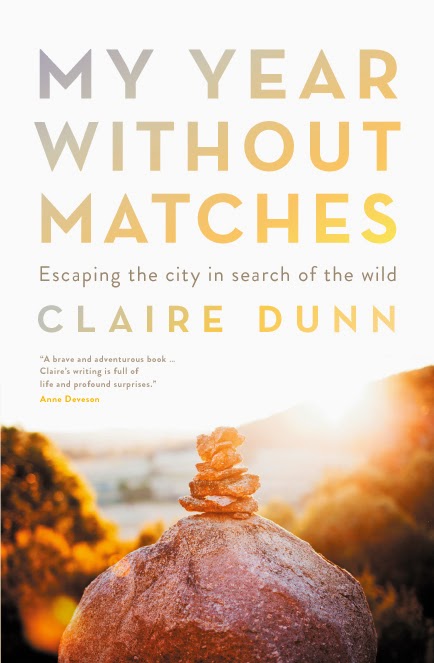 In My Year Without Matches: Escaping the city in search of the wild, Claire Dunn tells her story of spending a year living off the grid in a wilderness survival program. Here she writes about some of the wild foods that she lived off.

In 2010 I embarked on a year of bush immersion, learning the arts of indigenous living, such as primitive fire lighting, tracking, basketry, bird language and building a shelter from natural materials. Bush food was a priority. While this wasn't Survivor, I wanted to eat as much as possible from the land. While initially a wall of green, gradually my forest home became a supermarket as I discovered the wild foods at my thatched doorstep. Here are ten of my favourites.

1. Native Grape  (Cissus hypoglauca)
Despite hanging in dark bunches of berries in late summer and autumn, comparing the five-leaf water vine to a grape is drawing a long straw. Tart, and with a bitter crunch if you fail to spit the seed, the rainforest native is still one of the more satisfying of bush berries, if only due to its abundance. It boils up into a great jam – even better when sweetened with bush honey.

2. Geebung (Persoonia virgata)
Affectionately known as a snotty-gobble, the pea-green fruit of the geebung are the all day suckers of the bush food world. Littering the ground in summer, I would fill my pockets and pop a couple in my mouth whenever I passed. Spit out the skin, and suck away on the sweet, fleshy seed coating.

3. Mountain Devil Flower (Lambertia formosa)
Devilishly spiky, the fire-engine-red flowers of the mountain devil also hold delicious nectar. Without the advantage of a honeyeater's long beak, you have to wrap your entire mouth over a flower in the early morning when the nectar runs thick, or steep it in water along with banksia flowers for a cordial.

4. Seaweed
A three-day solo mission to a remote beach tested my hunting and gathering skills. The variety of soft seaweeds in the rock pools provided excellent greens. Boiling them up with some pippies and a smudge of miso, I was a happy camper when I fell into my swag under a pandanus tree that night.

5. Roly-poly (Billardiera scandens)
When our local Gumbaynggirr guide spied the unripe oblong fruits of the roly-poly vine, his eyes gleamed. According to him, it is the holy grail of bush food, but near impossible to source before the possums do. It was therefore with some excitement that I stumbled upon a single ripe grey fruit on the ground in early summer. After removing the skin, the flesh was a cross between a kiwi and a blueberry, and by far the sweetest wild fruit I encountered.

6. Native Sarsaparilla (Smilax glyciphylla)
The new red leaves of the native sarsaparilla vine seem to illicit either love or hate. While slightly astringent, for me the Dr Pepper sarsaparilla flavour was a taste sensation. Apparently a great blood cleanser, it was great addition to a wild salad and worked just as well to delay thirst.

7. Flax Lily (Dianella)
The stunning indigo of the dianella berries look too good to be true. They're much more than eye candy though, and I had to remind myself to leave some for the birds when they fruited in abundance during summer. This versatile plant also offered me leaves for basket-weaving and string, and while the fruits can also be used as a blue dye, I wasn't about to waste them on such frivolities.

8. Sour Currant Bush (Leptomeria acida)
This nondescript spiky plant which scratched its name on my skin daily, redeemed itself when it sprouted dozens of tiny translucent edible berries. Aptly named, they reminded me of the sour candies I favoured as a kid. Still, apparently higher in vitamin C than any citrus, I snacked as I went – at least I wouldn't die of scurvy!

9. Mat Rush (Lomandra longifolia)
A trip to the waterhole was never complete without a chew on a lomandra leaf. While not exactly curbing a carb craving, the base of the inner leaves delivers a good starch hit and has a sweet bok choy kind of taste. The remainder of the leaf joined the bunch drying in my shelter for basket-weaving.

10. Bulrush (Typhus)
This is one of those uber survival plants with more uses than I have space to list. The fresh roots and tubers were delicious when roasted on the coals, and necessitated a fun, muddy adventure to harvest. The fluffy 'cotton' in the seed head made excellent tinder for fire lighting.

My Year Without Matches: Escaping the city in search of the wild by Claire Dunn is available now in all good bookstores.

Posted by Black Inc. at 3:20 PM
Email ThisBlogThis!Share to TwitterShare to FacebookShare to Pinterest