What a wonderful world of hindsight we live in. Today we conclude that police like Brian Murphy got too close to villains and were corrupted in the process. I would argue that police of today are too far away. There is an ever-expanding array of technology available to police to ensure they don’t get too close to their targets. In fact, with surveillance technology, the officer may never look an angry man in the face before he arrests him. The cops can eavesdrop on conversations of villains, track their movements with devices hidden in their cars, or simply follow their mobile telephone signal. Despite this, there are still lots of guilty men going free because the cops did not do their jobs properly. 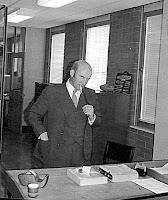 In Murphy’s day, to keep tabs on a villain you had to be in his pub, his line of sight and often right up in his face. It took some courage and guile. Today the force is largely reactive. The cops will wait till they can lock a bloke up before they move.

In Murphy’s day, it was standard practice to let a bloke know he was being watched, that the cops knew what mischief was being committed. It was an early warning system that helped keep the peace. Today, if a member of VicPol were to do this, he would find himself charged with perverting the course of justice.

In 1978, two Perth detectives asked Murphy to set up a meeting with Christopher Dale Flannery in Melbourne. Flannery would later become famous as “Rentakill”, one of the country’s most notorious hitmen. But at this time, he was a minor crim just out of jail, working as a bouncer at a sleazy St Kilda nightclub where Murphy operated his informer network.

Flannery had form in the West having beaten an armed-robbery charge for the hold-up of a David Jones store in 1974. Murphy promised Flannery that the West Australian cops wouldn’t arrest him, question him or belt him. They just wanted to tell him something.

Flannery agreed to meet them at Marchetti’s Latin Quarter in the city but only after a good deal of cajoling. After a couple of drinks over entrées and idle chit-chat, he grew increasingly agitated.
“So what’s all this about?” he asked.
“Well,” said one of the detectives. “We know that you’re planning to break your mate Archie Butterly out of Fremantle Jail with a helicopter.”
Flannery’s face froze.
“You should be aware that you’ll be flying in Swanbourne Army Barracks airspace, where the SAS are based.” He paused. “If they spot you, they’ll shoot you out of the fucking sky. So I’d think twice about it if I were you.”
Flannery was thunderstruck. He jumped up as if to leave the restaurant, but then his face softened. He thrust out his hand and shook with the Perth detectives.
“Thanks very much. You’ve probably just saved my life,” he said with genuine gratitude. Flannery was now indebted to Murphy.

Today this kind of deal making is way out of bounds. Imagine if Flannery had decided to carry on with breaking Butterly out of jail in a spectacular hail of gunfire. Imagine if the SAS, as expected, did shoot the pair of them out of the sky, the flaming helicopter crashing down on Fremantle’s residential areas. Imagine the scandal if it came out that police in two states had prior knowledge of the plot. The headlines would be irresistible. Rather than arresting Flannery on conspiracy, they had tipped him off and bought him dinner to boot. It doesn’t bear thinking about the aftermath. But none of this happened. Flannery dropped his plan and was grateful to Murphy. For the next year or so, Flannery and his network of villains in St Kilda fizzed to Murphy. Murphy even had advance warning Flannery planned to kill a solicitor Roger Wilson before it happened. He also tipped off the homicide squad that Flannery had killed another man, an associate from the St Kilda disco where they worked. The calculated gamble of tipping Flannery off had paid off, even if the homicide squad did little with the precious information that Murphy passed on.

It’s easy to condemn the past. Murphy broke plenty of laws in the service of what he was as his duty. Yet it was because of men like Murphy that police have the equipment and powers they do today. I would argue they are only marginally more effective than the old cohort, despite their obvious advantages.
Posted by Black Inc. at 10:29 AM No comments:
Email ThisBlogThis!Share to TwitterShare to FacebookShare to Pinterest
Labels: Adam Shand

Early in The Skull I wrote how a former Deputy Commissioner Bob Falconer said either Brian Murphy was “the most corrupt and dangerous man ever to be a member of Victoria Police or the most maligned. I don’t know which.”

It’s a dichotomy that troubled me ever since Falconer passed the comment. Falconer was part of a Vic Pol team that investigated Murphy and his protégé Paul Higgins in the early 1980s for involvement in Melbourne’s brothel wars. Vic Pol’s investigations would eventually land Higgins in jail for five years, while Murphy escaped without charge. That a competent investigator like Falconer could come to this ambivalent position was daunting to say the least. How was I to trip up Murphy if the State with all its resources and coercive power could not? It suggested Murphy had a power and cunning that went far beyond the norm.

If I were pressed, I would agree that Murphy was “corrupt and dangerous” but not in the conventional sense of the phrase. No-one I spoke to had any first hand accounts of him copping a quid. Second hand accounts tended to disintegrate upon investigation. His lifestyle does not suggest a man living beyond his means. But I would say that he did manage to “corrupt” the system he worked under. However, as another colleague told me, Murphy’s methods may have appalled him but whatever he did was always in the service of the community. It might not have always been lawful but justice in the extra-legal sense is not always clear cut. That’s why the second half of the book is called Ways and Means, back then the public generally did not worry about the methods, only the results. That has all changed today.

It’s interesting that many complain police have lost the battle for the streets. People are no longer safe at night, they can’t walk home alone without fear. Despite all the public surveillance technology, few offenders are brought to book for random assaults and thefts. And putting them in jail is often a shattering experience for the victim in court. It’s no wonder then that people fondly remember the days when police inspired fear and respect in the criminal classes. If they lost in court, they would square up with the villain later on. As brutal as it seems now, there was a deterrence factor that was undeniable. If you wanted to walk the streets in Murphy’s district you had to submit to his power.

I wonder how a modern day Murphy would fare today. Would he be drummed out of the force, even jailed for his methods? Or would he survive in any era, able to adapt to changing circumstances. I wonder whether we need such officers today.
Posted by Black Inc. at 1:24 PM 11 comments:
Email ThisBlogThis!Share to TwitterShare to FacebookShare to Pinterest
Labels: Adam Shand
Newer Posts Older Posts Home
Subscribe to: Posts (Atom)