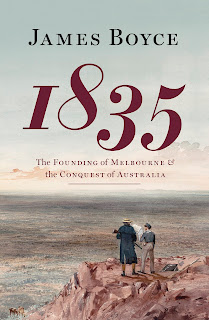 
#5 By the time Melbourne was founded other Europeans had already been living on what is now the Victorian coast for decades.

#6 The site of Melbourne was a well-known Aboriginal gathering spot with its own bridge across the Yarra.

#8 The lowland grasslands contained an incredible number of plants and were as different from ‘improved’ pastures as a tree plantation is from an old growth forest.

#9 In 1835 the first tents were pitched roughly where the Immigration Museum now stands.

#10 The founding of Melbourne represented a direct challenge to the long established British Government policy of concentrating European Settlement within defined boundaries.

#11 The eventual capitulation to the squatters and the opening up of Australia’s grasslands to private conquest led to one of the fastest expansions of Europeans in the history of the British Empire. Within a couple of years more land had been settled than in the fifty years before

#12 It was thus the founding of Melbourne, not the settlement of Sydney that signalled the emergence of European control over Australia.

1835: The Founding of Melbourne and the Conquest of Australia is available in all good bookstores.
Posted by Black Inc. at 4:53 PM
Email ThisBlogThis!Share to TwitterShare to FacebookShare to Pinterest