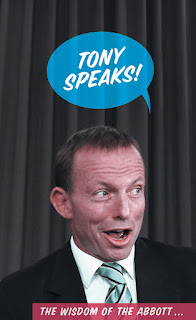 Tony Speaks! The Wisdom of the Abbott

You’ve seen him wearing speedos, kissing babies, driving a mining truck and chatting to his flock. But who is the real Tony Abbott? As the Bible says, by his words you shall know him.

In the grand tradition of Bushisms and The Wit of Whitlam, here are the sayings of Tony Abbott, unvarnished and full of revelations – the very best and worst of Australia’s irrepressible mad monk.

Tony speaks – on parenthood: “I won’t be rushing out to get my daughters vaccinated [against cervical cancer].”

The underclass: “We just can’t stop people from being homeless if that’s their choice.”

Honesty: “One man’s lie is another man’s judgment call.”

Divorce: “Come 2020, I’m confident that … families won’t break up any more often, because old-fashioned notions about making the most of imperfect situations will have made something of a comeback.”

Women’s rights: “I think it would be folly to expect that women will ever dominate or even approach equal representation in a large number of areas simply because their aptitudes, abilities and interests are different for physiological reasons.”

Christian teaching: “Jesus knew that there was a place for everything and it is not necessarily everyone’s place to come to Australia.”

and much, much more … 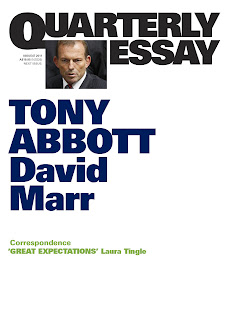 In Quarterly Essay 47, David Marr goes beyond the clichés – Dr No, mad monk, gaffe-prone, budgie-smuggling gym junkie – to look at the man as he is and reveal what kind of prime minister he might be.

This is a unique portrait of a unique politician. Marr shows Abbott as part reactionary and part pragmatist, part fighter and part charmer, deeply religious and deeply political. But is Abbott a figure from the past or a leader for the future?

Following the explosive Power Trip: The Political Journey of Kevin Rudd, this is certain to be the most discussed political writing of the year. 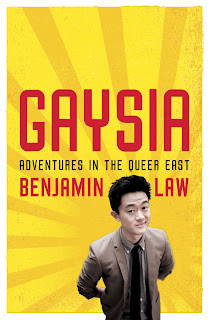 Benjamin Law considers himself pretty lucky to live in Australia: he can hold his boyfriend’s hand in public and lobby his politicians to recognise same-sex marriage. But as the child of migrants, he’s also curious about how different life might have been had he grown up in Asia. So he sets off to meet his fellow Gaysians.

Law takes his investigative duties seriously, going nude where required in Balinese sex resorts, sitting backstage for hours with Thai ladyboy beauty contestants and trying Indian yoga classes designed to cure his homosexuality. The characters he meets – from Tokyo’s celebrity drag queens to HIV-positive Burmese sex workers, from Malaysian ex-gay Christian fundamentalists to Chinese gays and lesbians who marry each other to please their parents – all teach him something new about being queer in Asia.

At once entertaining and moving, Gaysia is a wild ride – a fascinating quest by a leading Australian writer. 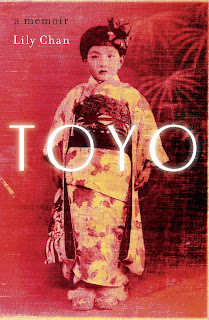 Toyo learned to ask nothing, to wait and count the days. But they passed and passed and still the doorway remained empty of his deep voice, calling out her name.

Blending the intimacy of memoir with an artist’s vision, Toyo is the story of a remarkable woman, a vivid picture of Japan before and after war, and an unpredictable tale of courage and change in present-day Australia.

Born into the traditional world of pre-war Osaka, Toyo must always protect the secret of her parents’ true relationship. Her father lives in China with his wife; her unmarried mother runs a café. Toyo and her mother are beautiful and polite, keeping themselves in society’s good graces.

Then comes the rain of American bombs. Toyo’s life is uprooted again and again. With each sharp change and painful loss, she becomes more herself and more aware of where she has come from. She finds family and belief, but still clings to her parents’ secret.

In Toyo, Lily Chan has pieced together the unconventional shape of her grandmother’s story. Poetic, vibrant and ultimately heart-rending, Toyo is the chronicle of an extraordinary life, infused with a granddaughter’s love.

"This is a beautifully lyrical and compelling voice, infused with deep insight and love" - Alice Pung

“An immensely subtle portrait ... vivid and surprising at every turn” – Amanda Lohrey 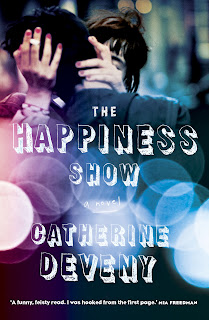 Smart, funny and refreshingly honest, The Happiness Show is the first novel from much-loved columnist and comedian Catherine Deveny.

At thirty-eight, Lizzie Quealy thinks she has things sorted: happy marriage, a couple of gorgeous kids, a steadfast best friend and a job she loves (most of the time). But when she bumps into Tom, an old flame from her globe-trotting twenties, everything she thought she knew is turned on its head.

Tom is her “unfinished business”: the man she might have spent her life with, if things had gone a little bit differently. Fifteen years on, the spark is still there – but how far is Lizzie prepared to go to recapture it, and at what cost?

Set between Melbourne, London and Bali, The Happiness Show is a hilarious, heartbreaking story about love and marriage, sex and friendship, the passing of time and the messiness of second chances.

"A funny, feisty read. I was hooked from the first page." – Mia Freedman

Posted by Black Inc. at 11:39 AM
Email ThisBlogThis!Share to TwitterShare to FacebookShare to Pinterest