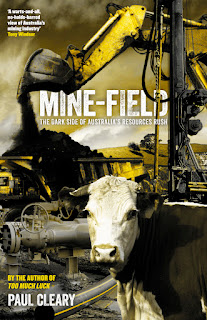 We interview Paul Cleary about his new book Mine-Field: The Dark Side of Australia's Resources Rush.

This book documents the rising power of the resurgent resources sector and the need for the government to play a more vigorous and independent role in protecting people and the public interest, especially prime farm land and water resources. Mine-Field is a book that gets down into the dirt and looks at the way the growing number of mega mining and gas projects operate on the ground. It reveals how governments have become deeply conflicted because they get a direct cut of the revenue, and how regulators often look the other way as companies pollute with impunity. While much of our environmental regulation is focused on flora and fauna, little regard is paid to protecting the people at the coalface. For governments today, the communities living in the shadow of the resources boom are expendable, and so are the land and water resources now being consumed at unprecedented rates by the resources juggernaut. The book outlines far-reaching reform needed to ensure that Australia avoids suffering irreversible damage from the mega mines now proliferating around the country.

Why did you decide to write Mine-Field?

I decided to write this book after I traveled through the Darling Downs region of Queensland and interviewed numerous farmers and residents who were living with the impact of mines and gas projects. I was astounded by the extent to which government protection was non existent. I met farmers who had to contend with duplicitious behaviour by companies and disinterest by government departments. In some instance, the companies refused to release the data on their noise and dust impacts to nearby residents. Nor did government insist on any fair mechanisms for compensating these people. It occurred to me that governments now regarded the people living in the immediate shadow of mines as something they were willing to trade-off in order to obtain increased royalty revenue.

Mine-Field looks at the impact of mining on farming communities and towns around Australia, in what way are people being affected by the expansion of mining? And how are some of the communities changing?

The communities living near mines aren’t changing, they are dying. When new mines open up it’s usually the younger families who move away, leaving the older residents to battle with the bureaucracy and corporate intransigence. Some people are lucky enough to be bought out, but those living on the properties that companies don’t need to buy are left to live with a 24/7 assault of noise, dust, blasting, toxic gases and the constant stream of heavy vehicles on their roads. I looked closely in this book at the Acland mine which when first opened a decade ago promised great things the community, including a shopping centre. Now the company, New Hope Coal, has destroyed the town to make way for yet another mine expansion. Ten kilometres away is the town of Jondaryan where New Hope has an enormous dump located just one kilometre from the town. Jondaryan gets covered in coal dust, and the population has steadily dwindled to just a few hundred people.

Mine-Field also looks at some of the dangers of coal seam gas and shale mining. What are some of the risks?

The main risk with CSG is the scale and speed with which we are rolling out this industry. If CSG were a pharmaceutical product, governments would insist on rigorous and lengthy lab tests. But such rigour is not being applied to this new industry, even though scientists know very little about the long term implications will be. CSG involves bringing billions of litres of saline groundwater to the surface which will in turn yield millions of tonnes of salt. There are also risks that the chemicals used to “frack” the coal seams to release gas will contaminate groundwater. There’s the risk that the vast networks of pipelines will leak methane gas into the atmosphere – in fact they are designed to leak. Methane is about 20 times more potent as a greenhouse gas than CO2. I’m not against CSG per se; I argue that it shouldn’t impact on some of the best farm land we have in Australia, especially when there are potential gas resources in arid parts of the country.

In the course of writing the book you met lots of people in rural communities who have been affected by mining – what are some of the personal stories you heard?

Some of the people I interviewed seemed traumatised by their experience of living next to mines and continually dealing with its effects and the company executives, who seemed to have a deliberate strategy to wear them down. The experience of one family was akin to living in a war zone as they encountered a constant assault of dust, noise and blasting gases from the mine located 2km from their home. I met an elderly couple after they had moved away from a mine and into an aluminium demountable because that was all they could afford with the compensation they received from the mine. For people living near mines, the operation becomes a daily intrusion on their lives, including the constant barrage of telephone calls from the company. When I interviewed a young mum who lived 2km from a mine she seemed completely stressed by the experience, really at her wits end, even though she was a highly intelligent and well educated individual.

In your book you write about the way that state governments have licensed mining operations, can you tell us a bit more about this?

State governments are responsible for most of the regulation of mining and gas projects in Australia, while they also collect a direct share of the income, known as royalties. As state governments are strapped for revenue, this arrangement creates a very strong bias towards licensing new projects even when they carry significant risks. This has been the case especially with coal seam gas as state governments stand to gain a very significant revenue share worth 10 per cent of the “wellhead” value. Governments have been prepared to license these projects even though they’ve received expert advice telling them about a host of risks and uncertainties. In Queensland, the government has been willing to license new projects in the Galilee Basin even though this will mean thousands more coal shipments through the Great Barrier Reef. Most state governments lack independent regulation and monitoring, and nor do they provide significant resources to their regulators.

You write in Mine-Field that mining companies often self-regulate the environmental assessments and conditions on mines, why is this the case?

As governments apply limited resources to the monitoring of resource projects, a DIY approach to reporting applies at the company end. Companies are allowed to commission their own environmental impact studies (EIS) to get approval, and they do the reporting on their impacts. The evidence I’ve obtained indicates that environmental consultants are biased on favour of getting projects approved, and when approved companies can choose the most favourable times to report on their impacts. The book shows how the reports that companies file on their compliance get filed away in government departments, even when the reports show that companies are exceeding the limits in their approvals. I’ve even identified instances where companies have bluntly refused not to hand over compliance data to people living near their mines. It seems to be a free for all.

Mine-Field also looks Fly In Fly Out (FIFO) and Drive In Drive Out (DIDO) workers and the long hours that they work. Do these working conditions have impacts on mining communities?

FIFO and DIDO are a new phenomenon that governments and even companies don’t fully understand, or in fact don’t want to understand. The impact on individuals, families and communities seems to be decidedly negative, yet governments and companies aren’t interested in researching these effects. FIFO and DIDO, however, do mean that regional communities now get even less out of mining developments than they did in past decades. Up until the late 1980s, companies had invested in building towns and related infrastructure near their mines, which created a benefit for these regions. Now, workers fly in to work camps and live in small aluminium huts known as dongas for 10-14 days at a time. This means that most of the income earned at these mines flows back to regional or capital cities, creating a lose-lose proposition for the local communities. DIDO is event worse, because it involves long drives by workers at the end of a string of shifts. There’s clear evidence that this is leading to rising carnage on our roads, but the companies are washing their hands of any responsibility.

What’s the solution to the issue you raise in Mine-Field?

We need to think about much stronger oversight of this industry through a well-resourced, federal-state institution. Australia has done well to create and support public institutions that supervise our banking system, our companies and our money supply, but the resources industry is a huge, complex and growing sector that has been overlooked. We should think of spending 3-5 per cent of the revenue we get from mining on regulation and monitoring, which can be thought of as an insurance premium to guard against the nasty side-effects from these projects. The federal-state regulator should license the environmental consultants who produce EISs and remove those licences when consultants produce dodgy data. People should be entitled to see real-time and online monitoring of these projects, all of this overseen by an independent regulator.

Mine-Field is available now in paperback and ebook formats, where all good books and ebooks are sold.

Readings bookstore is currently running a special offer on the paperback – buy Mine-Field online for just $17.99! (discounted from RRP$24.95).
Posted by Black Inc. at 2:56 PM
Email ThisBlogThis!Share to TwitterShare to FacebookShare to Pinterest