Q&A with Hugh White, author of The China Choice 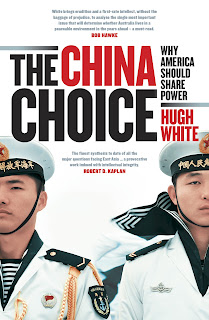 We interview Hugh White about his new book The China Choice: Why America Should Share Power.

Why do you believe America and China should share power?

Because sharing power between them is the best way - perhaps the only way – to keep Asia peaceful and stable. If America and China do not share power, and instead compete for primacy in Asia, that risks escalating into a new Cold War, or even open conflict. The consequences for everyone would be disastrous.

Why is this a controversial idea?

For Americans, sharing power like this with anyone - and especially communist China - would be a new departure. But as China becomes the most powerful competitor it has ever faced, America has no choice but to rethink its role in Asia. That’s hard, because it touches on America’s self-image.

It would also be unprecedented for Australians. We have always wanted our great and powerful friends to dominate Asia, not share power. But China’s rise means we need to rethink our place in Asia too, and our self-image.

How does the future of China and America’s relationship impact Australians?

The US-China relationship is the most important thing shaping our future in Asia. If they get on, we can continue to enjoy strong relationships with both. If they become rivals, we will face the hardest choices in our history. So far the trends are heading towards rivalry.

How does your view of the situation differ from other viewpoints?

Many people believe that America should try to remain the primary power in Asia, because if they do not China will take over and dominate in its place. I think there is a third option – with the US and China sharing power and balancing one another – which gives a much better prospect of peace.

You wrote a Quarterly Essay on the subject of China and America in 2010 – what kind of response did that essay receive from the media and those in power? How did that response inspire you to write The China Choice?

The Quarterly Essay attracted a lot of attention both in public and in government here in Australia, and also in Asia and the US. Many readers wanted to know more about three key issues. How serious are the risks of rivalry and conflict between the US and China? How would power sharing between them work to reduce those risks? How could it be brought about? So I’ve written this book to answer those questions.

The China Choice is available now from all good bookstores and ebook retailers.
Posted by Black Inc. at 4:52 PM
Email ThisBlogThis!Share to TwitterShare to FacebookShare to Pinterest