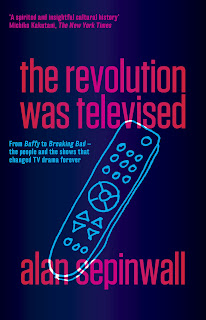 We chat with with Alan Sepinwall about The Revolution Was Televised: From Buffy to Breaking Bad – the people and the shows that changed TV drama forever

Can you tell us a little about your book The Revolution Was Televised?

The Revolution Was Televised is about a period in American television starting in the late ‘90s when a collection of producers given an unprecedented level of creative freedom introduced the world to some of the best, most transformational drama series in the history of the medium.

How did TV become important to you? What makes TV important generally?

Growing up, it was this magic box in my living room that could transport me to all these places I would never go, meet people I’d otherwise never encounter, teach me, entertain me, etc. TV is a great communicator and a great uniter, though as we move into a more fragmented age of viewing, it can also be a great divider.

With the rise of high-quality narrative TV shows do you think film will catch up again or do you think the art forms now have quite separate cultural roles?

There are still complex and mature film dramas being made, but they tend to exist on the margins of our cultural discourse, whereas it’s hard to go someplace without encountering someone who is crazy in love with Breaking Bad.

You became a TV critic against considerable odds very soon after graduating - do you have any advice for aspiring TV critics?

Write - a lot. The more you write, the better your writing will get. And be prepared to do it for the love of it. Every major success in my career happened because I started writing something (the NYPD Blue fan site, my original blog, this book) on my own, without anyone paying me to do it. That sort of luck will not happen to everyone (I was in the right place at the right time a lot of the time), but if you’re not doing it out of pure enjoyment, then what’s the point?

If you had to choose, which of the shows discussed in The Revolution Was Televised would be your favourite and why?

Going into the process, I’d have picked The Wire as an easy winner. But part of the work of writing the book was rewatching a lot of these series, and being reminded how great they each were in different ways. I’d still say The Wire is the most consistently successful at realizing its ambitions, but I also have a hard time ranking The Sopranos behind anything, if you know what I mean.

The Revolution Was Televised is out now in print and eBook.
Posted by Black Inc. at 10:46 AM
Email ThisBlogThis!Share to TwitterShare to FacebookShare to Pinterest