We chat to Anna Krien about her new book Night Games: Sex, Power and Sport, which is out now.

What is Night Games about?

Night Games begins with what happened when Melbourne woke after the 2010 AFL grand final to news that two Collingwood players were being questioned by the sexual crimes squad. From here I follow the subsequently linked rape trial of a junior footballer. The book is a bit like a set of Russian matryoshka dolls. The rape trial speaks to a much larger issue of the dark side of Australia’s two main football codes – Aussie Rules and Rugby League.

Over the past decade, the long-held journalistic silence surrounding the murky off-field antics of certain players, their treatment of women and each other has begun to fray, as rumours of hush money and allegations of sexual assault have surfaced. What happens on the footy trip is no longer staying on the footy trip.

I set out to explore this vast culture of entitlement that we, as a footy-obsessed society, have created around footballers, from the lawyers who keep them out of court, the police who cover up their misdeeds and club officials who say ‘boys will be boys’ to groupies, fans and star-struck journalists.

But Night Games is also about issues much bigger than footy – it is about gender and sport and, most importantly, it’s about that unspeakable and disturbing place that lies between consent and rape.

What drew you to write about this aspect of sporting culture?

Over a decade ago, in the front bar of a pub in North Fitzroy, I was listening to the pub trivia going on in the back room when this question came up.
‘What was the name of the girl who died in a hotel room with Gary Ablett?’
I remember sucking in the air like I’d been punched. Surely this isn’t pub trivia, I thought, and then just as quickly I prayed for someone to remember her name, the twenty-year-old footy fan who lay comatose from a drug overdose while forty-year-old Gary Ablett Senior, known as ‘God’ to his admirers, called an ambulance and then did a runner, hiding out with his manager, Ricky Nixon. For hours the girl had been a ‘Jane Doe’ in the hospital.
‘Horan!’ one guy yelled out. ‘Alisha Horan!’ His trivia team whooped. I wrote the incident down on the back of a beer coaster – I didn’t know what I was going to do with it at the time but I just thought, don’t forget this.
So I suppose this book has been hovering in my subconscious for a long time, but it really took shape after I wrote this essay, ‘Out of Bounds: Sex and the AFL’, for The Monthly about Kim Duthie, also known as ‘the St Kilda schoolgirl’.

You haven’t written about sport a great deal previously. Did you come up against any barriers in researching and writing the book?

I can’t say I saw a red carpet rolled out in my honour!

I did get the sense that some people felt like I was stepping on their turf and a few local sports writers I contacted understandably feared I was going to tar all footballers with the same brush. So yes, it wasn’t an easy book to research, and I want to emphasise that Night Games is not anti-sport. There’s this great quote by Robert Lipsyte, an American sports writer: ‘Jock culture is a distortion of sport.’ It’s not sport that’s the problem, it’s men who use sport for power, and the people – teammates, fans, coaches, clubs, doctors, police, journalists, groupies – who let them do whatever they want. 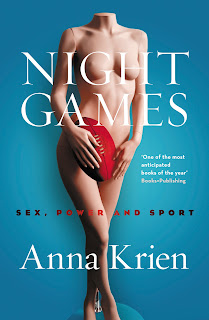 Night Games follows the rape trial of a footballer. You spoke to and spent time with the defendant, Justin Dyer, but you weren’t able to speak to the complainant, Sarah Wesley. Did this affect your reportage of the trial?

Yes, most definitely this affected my reportage of the trial.

I was privy to Justin and his family’s suffering throughout the trial. They were under enormous pressure and I felt for them. At the same time, I was acutely and constantly aware of Sarah’s silence in the story I was trying to write. I had no one with whom to compare the Dyer family’s suffering. Also – I desperately did not want to fill Sarah’s absence with my own reflection, to use a younger version of myself as a stand-in or to use my own experiences to explain hers. As a result, there is a very real gap in this book, a gap I could not fill, and I hope I’ve managed to respect that silence and not tried to plug it up with excuses.