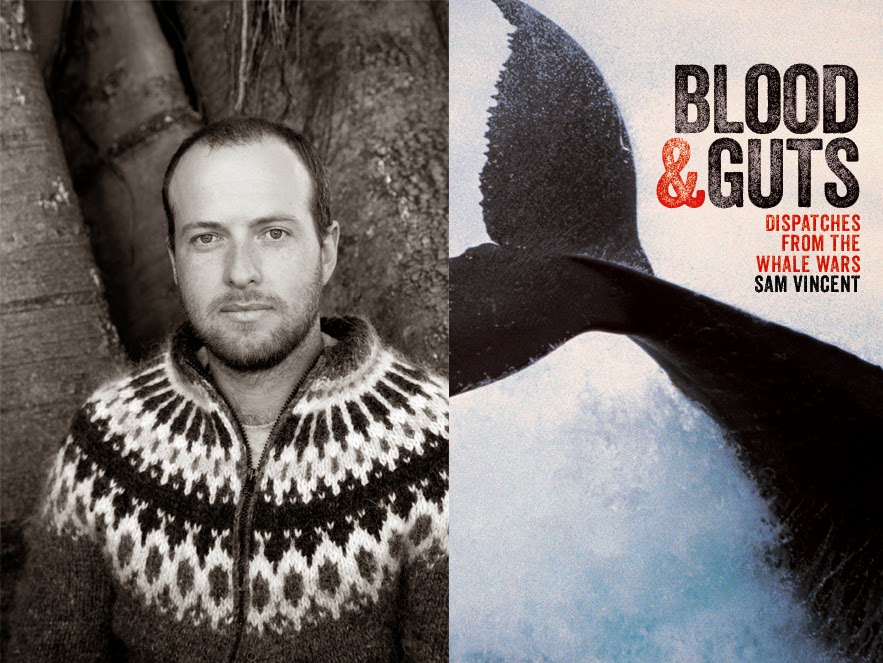 Sam Vincent is the author of Blood & Guts: Dispatches from the Whale Wars.

After spending nearly two years researching, reporting and writing Blood and Guts, I’m sick of people who deal in absolute dichotomies. Eco-warriors or poachers; scientists or eco-terrorists; floating steaks or minds-in-the-water; goodies or baddies … I was attracted to the Antarctic whaling controversy because in it I see so many shades of grey: legally, ethically, environmentally and politically. But so many people just see a chequerboard of right and wrong; a point by which they can fix their moral compass.

I was continually asked if I was ‘pro-whaling’ or ‘anti-whaling’. Aren’t I allowed to think that the efforts of Washington State’s Makah Tribe to reclaim its cultural heritage by hunting gray whales, after being smashed by American expansionism for the previous 200 years, is a beautiful thing? Can’t I recognise that Iceland returned to the International Whaling Commission in 2002 with a reservation on the global whaling moratorium, but disagree with its subsequent decision to hunt endangered fin whales? Am I not able to celebrate the fact that the arrival of grog and missionaries didn’t stop Alaska’s Inupiat from hunting bowheads – and celebrate the fact that since commercial whaling in the Arctic ceased, bowheads, once threatened with extinction, are increasing steadily? Can’t I hold all these views and question why Japan maintains a program of negligible scientific esteem for a product its public doesn’t want?

But I didn’t seem to be allowed a nuanced view: it’s one or the other, you’re one of them or one of us. Whaling divides and unites, creating a demarcation, a fracture, a border between peoples. So how do you remain objective when the stakes are that high?

This is a work of gonzo journalism; I think it is extremely subjective. But it doesn’t pick sides. I approached this topic as objectively as I could, but after spending three months at sea with Sea Shepherd, visiting Japan three times and attending the recent International Court of Justice case at The Hague, I began to see that small-minded populism from all sides of the ‘whale wars’ is prolonging a conflict that should have been solved decades ago.

The closer to the middle of a story a reporter gets, the more exposed they become to criticism. But my favourite journalists aren’t afraid to be iconoclastic; to position themselves as truth-tellers unbeholdened to any side. This is why I love the writing of Matt Taibbi, Rian Malan, Michael Hastings and Janet Malcolm; and in Australia, of Anna Krien, Helen Garner and David Marr. None of them write to make friends, nor for people who have already made up their minds. It’s a lonely position to be in, but as an investigative journalist who values independence above everything else, that’s precisely where I want to be.

Blood & Guts: Dispatches from the Whale Wars by Sam Vincent is available now in all good bookstores.

Posted by Black Inc. at 3:21 PM
Email ThisBlogThis!Share to TwitterShare to FacebookShare to Pinterest