The Story Behind Ghost Wife: A Memoir of Love and Defiance 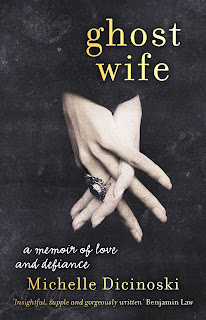 I married my American wife, Heather, on a wintry Toronto day in December 2005. A few days later we left Canada, and despite the vows we’d made, and the rings on our fingers, and the marriage certificate stored in our luggage, we were as unmarried as ever, as far as the United States and Australian governments were concerned. Crossing the Canadian border, I wondered whether I would feel different on the other side … Nope. But I was different, in ways that were hard to explain.

From the time Heather and I decided to marry, I knew that our marriage would ‘disappear’ like this, and, I wanted to record the disappearing act. In blog entries and journals I wrote about our wedding journey, which took us from Brisbane to Boston to Toronto to Florida, and took me on my first overseas trip. When we returned to Brisbane, I began to turn the experience into a book.

I thought this book would focus on my relationship with Heather—and it does, for the most part. But when I began writing, a surprising thing happened. Other stories began spilling out of me, stories of old secrets from my family’s past. Like the tale of my acrobat great-grandfather on my Dad’s side, a child migrant and one of Australia’s first Japanese immigrants. His ethnicity was so well concealed that I didn’t know about it until I was at university.

Another was the story of my maternal grandfather’s disappearance in the late 1950s. From the age of nine, my mum grew up in a children’s home in Brisbane because her mother couldn’t care for her or her siblings. The family was wrenched apart after my grandfather’s disappearance, and Mum and some of her brothers and sisters were raised in children’s homes, destined to join the ranks of the hundreds of thousands of ‘Forgotten Australians.’

This kind of thing happened a lot in my family: people disappearing, histories disappearing, things being covered up. It happened in a lot of families in those days, of course; it was a different time. But these kinds of silences affect families and individuals in profound ways, I think, and they can affect them for generations. In writing about silences within my own family, I came to understand my family history a lot better, and how the past influenced the present.

So, my family history is one kind of story that unexpectedly appeared in the memoir. The other is the lesbian and queer histories of the places in which the memoir is set. I write about Brisbane, Melbourne, Boston, Toronto, and Niagara Falls, and in each of these places, I tell historical stories of other women who had intimate relationships with other women in those places, but 50 or 100 or 150 years ago.

In retrospect, I think I was trying to imagine a kind of alternative lineage for us, a historical thread that stretched from a past we had never known into a future we’ll never see. This is what you do when you find few representations of your life in the culture. You imagine. You fantasise. You build your own. So there are numerous ‘ghost’ stories in this book, and the story of my marriage to Heather is the major one, but not the only one.