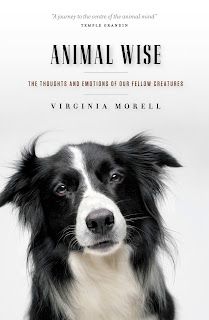 We speak to Virginia Morell about her fascinating new book Animal Wise: The Thoughts and Emotions of Our Fellow Creatures

Can you tell us a little about your book Animal Wise and what makes it different from other books about animals or animal intelligence?

I’d never thought of my book in exactly those words, but Hal is right. I wanted to show who the scientists are who investigate the minds and emotions of animals; what draws them to their ‘study’ animals; what’s the relationship between the researcher and his/her animals. So as well as looking at exciting new discoveries about animal minds, Animal Wise is also about the kind of people who ask extremely difficult questions — such as "what is it like to be a fish?" or "do elephants grieve?" and how these researchers then go about finding the answer.

Why did you decide to write this book?

I’ve been intrigued by animal minds for most of my life, but especially since visiting Jane Goodall in 1987 at her chimpanzee study site in Tanzania. I was there to interview Jane for my first book, Ancestral Passions. While I was there, one chimpanzee involved me in his political schemes, and, with Jane’s assistance, another young chimp deceived her elder. The chimpanzees were clearly thinking, as well as experiencing and expressing emotions, but Jane couldn't describe their behaviour in that way because there was a bias at the time against animals having minds, and being capable of thinking or feeling emotions, especially positive ones, such as love. She had to use indirect expressions to describe their behaviour; “The young chimpanzee behaved as if she were deceiving him.”

In the years since my visit with Jane, the field of animal cognition research has shifted; as Jane predicted, scientists have adopted a more Darwinian perspective. They no longer ask, “Do animals think?” Instead, they want to know, “How do animals think?” In Animal Wise, I introduce readers to some of the scientists who are asking this once-forbidden question, and guiding us into the barely explored realm of animal minds. From their discoveries, we now know that not only do chimpanzees plot, they also have the ability to deceive one another. There is no “as if” about it.

As part of your research for Animal Wise, you travelled all over the world to interview and observe pioneering researchers at work with their animal subjects. Can you tell us about some of the highlights?

The ants were surprising on many levels: They teach others; they know exactly the size and shape of the most suitable ant-home, and have ways to measure and compare spaces; when they need to reach a group decision, they basically vote.

Listening to the laughing rats was delightful; I never would have guessed that rats laugh. The attentiveness of elephants surprised me. They seem such stolid creatures, yet they are paying attention to everything—sounds, movements, rocks, trees. They know when something in their environment has changed— “That rock wasn’t here yesterday!” And they know each other as individuals.

Hearing Alex the African Gray Parrot speak was extraordinary. In my mind, I can still hear him saying, “Want wheat,” when he thought he should be fed a treat. “Yellow,” when Irene Pepperberg, the scientist who worked with Alex, asked him to tell her the colour of a cup. He also scolded one of his fellow parrots, telling him, “Talk clearly! Talk clearly!” when he mispronounced a word. And Alex thought of himself as a “Good birdie.”

In Animal Wise you discuss the way that our recent and increasing understanding of animal intelligence raises questions about the distinctions we as humans make between ourselves and other animals. What were some of the most surprising or challenging facts you learnt while researching your book?

I can’t say that I was surprised when scientists discovered that bowerbirds—a species that some of your readers may have in their backyards—have an artistic sensibility, the only animal that has so far been shown to have this talent.

There are several species of bowerbirds, and in most of these the males build some structure (or bower) which they use as a platform for singing and dancing. Like rock stars, it’s the male bowerbirds’ way of attracting females. Some species’ bowers are extremely elaborate, and yes, artistic, decorated with eye-catching flower arrangements, nuts and seeds, bits of glass and pebbles. The first time you see one of their bowers, you can’t quite believe that a bird did all this—until you see the male managing and re-arranging his treasures. He steps back, too, to assess what his bower and decorations look like—just as human artists do when eyeing their paintings. Scientists studying one species discovered that the males use the technique human artists do to create the illusion of perspective.

I also loved learning that whales—and cows!—have regional accents; that moths remember what they ate when they were caterpillars; that songbirds practice their songs in their sleep; that sheep remember human faces—so do crows; and that dogs can learn to do things by imitating another dog, or their owner.

Do you have any advice for aspiring writers or science journalists?

Read! Listen to people speaking so that you get a feel for dialogue and how people use language. Be observant. Read Darwin. 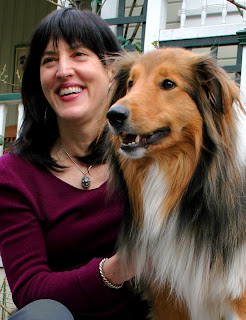 And last but far from least, as someone who has looked into human relationships with animals in great depth, what are your thoughts about the common notion that people are either ‘cat people’ or ‘dog people’ and can’t be both?!

I’ve never accepted this distinction. I have both a Calico cat, Nini, who is very shy, and an old-fashioned farm or Scotch collie, Buckaroo, who is exuberant. Yes, they are different animals. Nini doesn’t join us on walks, but she loves to be with us in other ways. She’s a lap-lover, and always manages to scoot between me and any book I’m reading. Buck wants to be with us at all times; Nini spends more time on her own. This is supposedly one of the big differences between dogs and cats. Yet, Nini cries pitifully whenever I return from a trip—she misses me. She also studies my face very much like Buck does. Both pets know my face in detail—probably better than I do. And both give me laughs, love, and joy— the pleasure, in their own ways, of their companionship.

Animal Wise: The Thoughts and Emotions of Our Fellow Creatures is available now.

Posted by Black Inc. at 11:43 AM
Email ThisBlogThis!Share to TwitterShare to FacebookShare to Pinterest
Labels: animal wise, virginia morell