We've gone slightly animal mad here at Black Inc. mainly due to the recent release of Virginia Morell's fantastic new book Animal Wise: The Thoughts and Emotions of Our Fellow Creatures. So in a homage to one of our favourite sites Review of My Cat - Black Inc. have decided to review their own pets.

Leave a review of your own pet in the comments to win a copy of Animal Wise! 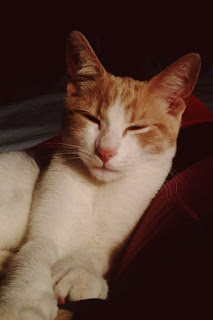 Appearance: A
Last Christmas, my aunt pulled me aside after lunch to tell me very seriously that Boo was probably the prettiest cat she’d even seen. He's cream with ginger patches most of the time unless he's been rolling in the dirt. Then he's slightly grey.

Sociability: B
Boo generally follows us around most of the day and he's always waiting by the front door when we get home. He’s also very good at finding the only person in the room who doesn’t like cats and sitting in their lap. He doesn’t like children and he generally falls asleep during dinner parties.

Usefulness: A
Boo very helpfully caught a rat last weekend and left its body in the hallway as a gift for us. I appreciated this more after I stopped screaming. He tries to do my boyfriend's filing but just ends up scattering paper around the room and chewing on the bills. He could use some secretarial training.

Huggability: A
Despite occasionally mistaking hug time for playtime (playtime comes with bites and scratches and hug time does not), he really is the warmest, softest little cat around. 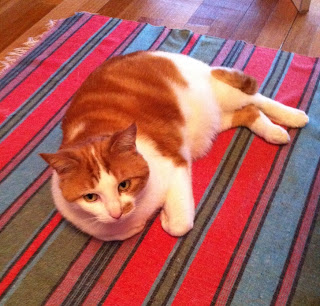 Appearance: C-
Oscar is ‘big-boned’ and does not fit on his owners’ laps. His belly hangs down like an apron, and he has a ginger patch on one side of his face that makes it look like he’s had his nose in a jar of marmalade. He has the unfortunate habit of lifting his tail high in the air and standing with his backside in his owners’ faces. Usually he maintains a blissfully vacant expression, but every so often he gets a playful, kittenish look on his face that is adorable. Usually this expression precedes a session of roly-poly tail chasing.

Sociability: A
At first Oscar will pretend to be scared of strangers, but as soon as they extend the hand of friendship (that is, literally extend their hand to pat him) he will come running. He will then smooch legs and attempt to sit on his new friend. If you don’t want to be sat on and gently shove him away, he will bodily resist. This is extremely annoying in hot weather, but also incredibly endearing, in a clingy kind of way.

Usefulness: F
If there’s something that you need to use, Oscar will try to sit on it. This includes, but is not limited to: laptops, newspapers, books, knitting projects and your lungs while you’re sleeping.

Huggability: A
Once he tried to snuggle up to our other cat, Jemima (highly anxious, timid, generally cranky and now deceased) and copped a wallop on the nose. It didn’t stop him trying to cuddle up to her again and again. Will always try to cuddle owners regardless of their mood, and though Christina lives in a different house to Oscar now, he always remembers her. 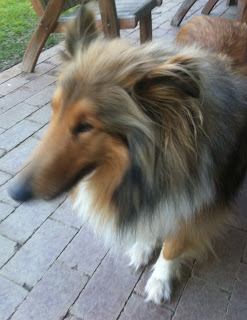 There is no question that Penny is a beautiful dog. However, unlike her much missed elder sister, Maggie - who was an athletic but fastidiously elegant lady – Penny does not regard puddles with distaste and consequently will joyfully bring a full geological sample home with her after every walk, complete with the inevitable burrs and twigs that her long fur attracts.

Sociability: A
Penny is extremely loving and loyal to her family and naturally she particularly adores her human-mother. She is, however, shy of strangers and while she is never rude, she takes some time to assess the intrinsic qualities and friendship potential of new acquaintances. In some cases this process may take years – the local baker (who is of excellent character) has sought Penny’s friendship since 2009 and it is only in the last six months that he has been truly accepted. Studies may yet show that there is a correlation between this extended audition period and the vividness of his baking apparel.

Penny is generally friendly with other animals, although she does not care for earthbound koalas in her territory. The staring competitions are unmatched in their intensity.

Usefulness: B+
Normally a calm and hysteria-opposed creature, Penny routinely takes leave of her senses during thunderstorms, which she detests. Being a sheepdog, she has been known to leap the 6 ft fence to escape to the park to take shelter. Her choice of refuge has long baffled her family given that she is usually found skulking along the creek bank, which is quite possibly second only to the creek itself as the least safe sanctuary during a storm.

On windy days she can be found wedged in despair between the sofa and the wall pining, we assume, for her bowl of gruel as sudden gusts of wind cause internal doors to slam, pine trees to wail and gumnuts to ping pong on the roof.

Huggability: A+
Penny is a full-sized Scotch Collie, so she is a large dog. However, as she is fine-boned and mostly fluff, even someone as weak as I can lift her and carry her around to find the ideal location for a prolonged cuddle.  The carrying is entirely for sport as the only invitation Penny needs for a cuddle with one of her people is eye contact and a tilt of the head towards your lap/ bed/section of the floor.

Overall Grade: A+ (not mathematically determined) 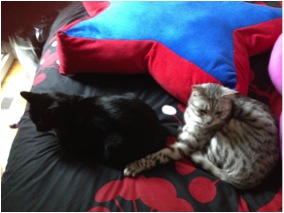 Appearance
Munchie: A
Phoenix: A
Munchie’s tuxedo black-and-white coat means she’s always ready for the next gala ball. Phoenix looks like a snow leopard in miniature.

Sociability
Munchie: C
Phoenix: A
Munchie is a fly-on-the-wall cat: she likes to be in the same room as you, but prefers that you don’t acknowledge her presence. Phoenix wants to be in your face all the time, and will nudge his head under your hand if you don’t pat him sufficiently often.

Usefulness
Munchie: E
Phoenix: B
Unless you need a fluffy pillow kneaded, Munchie has no use for you. Phoenix’s skill at opening any unlocked sliding door would be useful for amateur burglars; he is also adept at hiding under a canvas shopping bag for hours, all the better for a surprise attack (just ask Munchie).

Huggability
Munchie: F in summer; A in winter
Phoenix: A
Munchie has mastered the art of ducking to avoid hugs of any kind; but in winter she insists on snuggling under the bedcovers and being hugged like a teddy bear. Phoenix is hug-ready (and hug-demanding) 24/7.

Overall Grade
Munchie: B
Phoenix: A 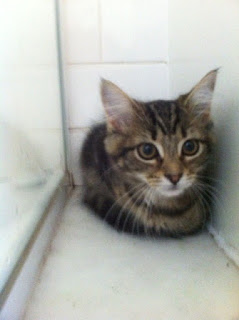 Appearance: A
Who doesn’t love a kitten? Cookie is four months old, fluffy and has the sweetest face. She manages an Audrey Hepburn-style grace, even when falling backwards down a tree. OK, it was her first experience of tree climbing. She was definitely the most beautiful kitten at the lost cats home the day we adopted her.

Sociability: A
Cookie is playful and loves our two kids. She spends a lot of time flinging tiny faux cupcakes around the living room, stalking dressing gown cords and chasing her own tail/shadow. If I am typing on the computer at home she’ll sit on the desk, stand with her face right up to the screen and then chase the letters as they appear.

Usefulness: C
She’s young, so yet to catch a mouse. But judging by the things she has caught in the house so far - small woolen pig, two stuffed owls, socks, ribbons - it won’t be long.

Huggability: B
Cookie doesn’t like being hugged, exactly. But she likes lying next to us and being patted. And then she purrs in that rattly, loveable way they do. 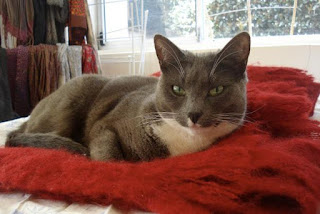 Appearance: B+
Fern's best features are her clear green eyes, droopy white whiskers, milk-white paws and ruff (and the 'milk-stain' around her mouth), and velvety double coat. In winter (pictured) she is quite fluffy and seems plumper, while in summer she takes on a more elegant, streamlined appearance as she sheds.

Sociability: C
When the buzzer rings, Fern's pattern of behaviour is as follows: 1) Hide under the bed 2) Gradually emerge and sit in the bedroom for a while, out of view, staring in the direction of the guest 3) Slink out of the bedroom and stick face in guest's bag, shoes and any other possessions 4) Sniff guest's hand 5) Play with guest 6) Possibly allow some pats. As for other cats, when a fluffy white cream-puff entered our courtyard, Fern darted to the window with a death glare. The poor creature leapt a foot in the air and seemed to fly back over the gate.

Usefulness: C+
Fern possesses all the feline accomplishments appropriate to a young cat of good sense and taste. She excels at pest removal and has taken a particular interest in daddy-long-legs. If we had mice, I'm sure she would dispatch them swiftly and with pleasure. Fern keeps our feet warm in the winter and decorates our floor with her fur artworks in the summer. She has an excellent vocal range and sings, in her own way, to the plump birds that taunt her by sitting on the powerlines.

Posted by Black Inc. at 11:05 AM
Email ThisBlogThis!Share to TwitterShare to FacebookShare to Pinterest
Labels: animal wise